I had the opportunity to accompany my internship program to experience The Color Purple on Broadway on June 9, 2016. It was a last minute decision and I’m glad I went!

The popular movie and musicals  of The Color Purple are an adaptation of the 1982 epistolary novel by Alice Walker. The novel has since won a Pulitzer Prize for Fiction since it was published. I had the opportunity to read the book in my Lesbian Novelist class this spring semester and I was quite shocked to find that I enjoyed myself. I have always shied away from it because I was never able to finish the movie adaptation and it just scared me silly!

Through the book, I found out about a woman who just appreciated been alive and her name was Celie. Celie was raped by the man she thought was her father and had two children he gave away without her knowledge. The book is written in letter from Celie to God, Celie to Nettie and Nettie to Celie. Nettie was younger than Celie and went to Africa to do missionary work where she met African who were proud of themselves. Shug Avery was her husband lover and eventually became someone who was very important to Celie and Sofia, her step-daughter inlaw who was brazen, strong and took no bull from nobody.

Women with different attitudes who were flawed in their own way but but stronger and more real than ever. I pitied some of the men in their life with their strong patriarchy views because Albert was an exact reflection of his father that believed to keep a household in order, a strong arm (beating) must be used and tried to pass it on to his son, Harpo.  Harpo found out it doesn’t work that way when Sophia beat him up for trying to beat her into submission.

The book and the Musical had many elements that mirrored each other well, giving an authentic feeling for some one who have read through all of Celie’s letters to God and then eventually to Nettie. We watched the real struggle of how Celie was angry with God, her finding herself through the help of the women and even men around her. We saw the correlation  in the book and musical of the attraction that was subtle, delicate and potent between Shug Avery and Celie that blossomed into love that helped heal the wounds between Celie and Albert. 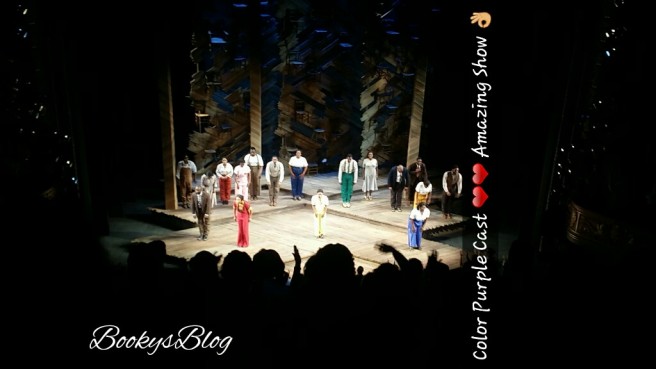 The way of speaking was also emulated in the musical that it was very enthusiastic to find Shug utter to Celie that “You sure is Ugly!”. The cast had a flow very natural with each other that it was very magical to experience such acting. The musical numbers were amazing! I do not have the list or the name of the songs but I found specifics scenes very amazing that there were several standing ovations on the day that I went and I could bet my future purchase of a certain Celine bag I’ve had my eyes on that June 9 was not an exception but the norm with several standing ovations during the show.

Some of the language and dance scene are rated R but they were not disgusting because it was given with such humph that you couldn’t help but laugh.

It was overall an amazing show to watch if you can, but definitely pick up the book and read if you haven’t!

Welcome to my blog! You'll find my experience as a PA student, tips to help you survive PA school, book review as well lifestyle tips sprinkled around. Leave a comment and don't forget to check out my Instagram (@bookysblog) for more 💛 View all posts by Booky's Blog